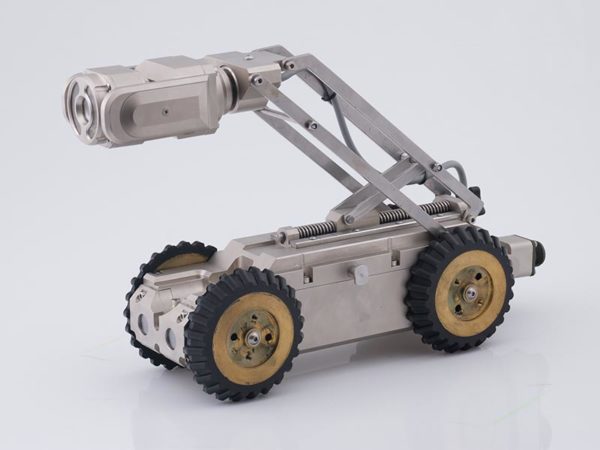 INSPECTION OF PIPES AND CHANNELS

Set for inspection of pipes and channels:

The RTE 70/800 portable video inspection system is intended for inspection condition of patency of pipes and channels using a high resolution camera. It allows quick detection and recording of obstacles, congestion, cracks and other damages caused in water supply and sewage pipes, etc. The system enables placing on the monitor an image, descriptions allowing quick identification of the examined area together with a record of the distance (meters) traveled through the probe and slope of the tested section of the channel in the form of a slope chart (available in a set with a trolley). The camera has an automatic leveling system in both axes and a system called UPC (camera can take a horizontal position relative to the ground regardless of tipping the trolley). The archiving of inspections is carried out on a computer mounted in a box (control panel), and the processing of the recorded image takes place via a special computer program. The image from the works on the channel can be recorded on a Pendrive disc, the movie can be accompanied by a printout of inheritance and a report on the appearance of the channel.

The RTE 70/800 kit for pipe and duct inspection is a modular set. Its basic element is a box with a built-in computer set with software, a 17 “LCD monitor, and electronic circuits enabling the display of typed keyboard texts, the size of the traveled path through the probe and the inclination of the tested sections of pipes and channels. From the desktop placed in the box we control the camera’s eye lighting and the movement of the self-moving trolley. The remaining elements (modules) are chosen by the Ordering Party depending on the needs.

The kit can be retrofitted with additional modules at any time. All components of the RTE 70/800 Kit are compatible with each other.